The Bush Pump has been serving the people of Zimbabwe for 80 years. 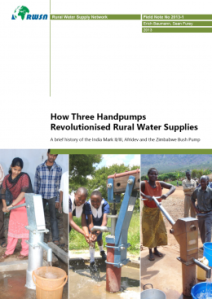 In the new publication “How Three Handpumps Revolutionised Rural Water Supplies” from RWSN, Erich Baumann explains how three handpumps, the India Mark II, the Afridev, and the Zimbabwe Bush Pump were developed and Sean Furey explores what lessons can be learned for scaling up WASH technologies today.

Unlike other handpumps used across the world, the Bush Pump has a long history. It was born in Zimbabwe in 1933, and designed by Tommy Murgatroyd, a Government Water Supply Officer in Matabeleland. Murgatroyd established the basic components of all later Bush Pumps – a wooden block, a strong pump stand and heavy-duty components.

The initial models remained almost unchanged for about 40 years until Cecil Anderson, an Engineer of the Ministry of Water, made the first major changes in the mid-60s. He replaced some of the bolted parts with components that were welded together. The remarkable idea to use U bolts to attach the pump head directly to the well casing dates back to that time. The improved pump was given the name of Bush Pump. It became the National Standard and was spread all over the country. 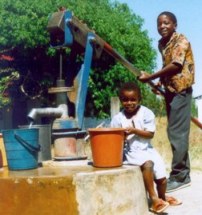 During the 1980’s and 1990’s, a considerable amount of research and development work was carried out to make the Bush Pump more user-friendly. In 1987 the Government of Zimbabwe’s National Action Committee (NAC) – who were charged with overseeing the country’s National Rural Water Supply and Sanitation program – decided that a new single standard for the Bush Pump was required and tasked Peter Morgan, of the Ministry of Health’s Blair Research Laboratory, to undertake the work. He went on to design a new model which inherited all the sound features of the older Bush Pumps, but reduced the number of wearing parts and was more compact. This new pump head, which used a “floating washer” system, was named the “B” type Bush Pump.

The cost of the pump in Zimbabwe is high by international standards. This is partly the result of the unusual economics and raw materials availability which have been disrupted by the political and economic situation in recent years. However, being a national standard, the pump is well known and understood by both users and technicians, and supply chains are short compared to countries reliant on imported India Mark II and Afridev pumps and parts.