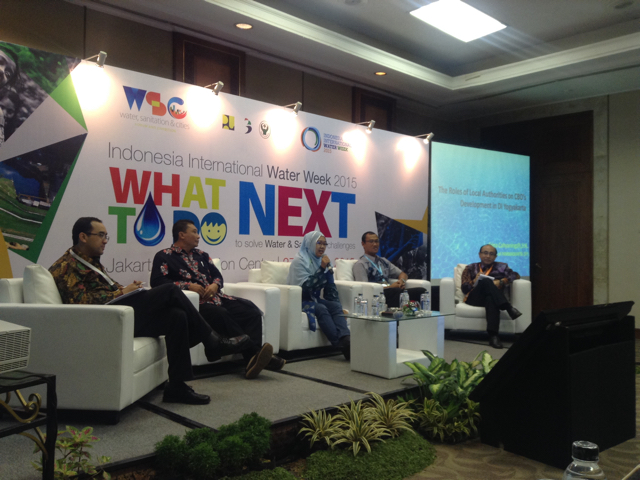 So I’m at the Indonesia International Water Week 2015 and on the second day, the event has been split into six parallel streams:

In the first session of the morning I attended stream 2, where there were four presentations on different aspects of community based management of rural water supplies. In general, urban water is managed by authorities and rural by communities.  The presentations were from those directly involved with supporting Community Based Organisations (CBOs) and also from WSP of the World Bank.
They key points that I took away were that there appears to be recognition that CBOs are an essential component of the government’s strategy of achieving universal access to water and sanitation. However, these organisation needs support in various forms:
Mr Setiawan from WSP said that to bridge the gap in public financing, banks can play an important role, but they are only willing to lend with CBOs with a very good track record. During the Q&A, a representative from a CBO said asked if it was possible to get easier access to bank credit for their water system because the process is currently very bureaucratic and that members of the organisation have had to pawn their private posessions to provide the collatoral for loans, which is a very undesirable arrangement.
Overall, I sensed that people here are grappling with similar issues on community management that are found in many other parts of the world, and that some good progress has been made, but the situation is changing fast as government seeks to accelerate coverage rates.
I switched rooms for the second session to listen to presentations on mixed water sources and water supply for small islands. Sadly, the second speaker was someone different from the programme, who talked about climate change impacts, which although an important topic, was rather generic and I thought island water supplies would be something that Indonesia would have world-class experience with!
Meanwhile, the first speaker, Arief Sudrajat from the Bandung Institute of Technology talked about how water scarcity in many parts of Indonesia threatens the achievement of the 2019 universal access goal. He advocated for better understanding and use of mixed water sources for potable and non-potable uses. He covered examples and relative costs of rainwater harvesting, wastewater recycling, desalination, stormwater capture & use and artificial aquifer recharge. His institute has developed a spreadsheet based decision support tool to help CBOs and local authorities find the optimal mix of water sources for their context.
The session concluded that with such higher water wastage, re-use and re-cycling of water is going to be essential.
After lunch it was my turn. The session focused on the role of CBOs in water safety planning and rural water supply. Hery Simanjuntak of WHO introduced Water Safety Planning and how it has been incorporated into Indonesian policy and practice. He emphasised the importance of the multi-barrier approach between water source and the point of use, so that water users are protected from contaminated water.  I then followed, with a more global perspective on water source protection – the link between water safety planning and IWRM, drawing on examples from Uganda, Tajikistan and Liberia. In the Q&A I was asked about the legal status of CBOs – I pointed out that it seems to be stronger here than in other countries, and that really helps. I was asked about saving for major repairs – I pointed to this being a common problem encountered by CBOs all over the world, but that from the examples quoted today, it appears that some CBOs at least, are able to save quite substantial amounts. Finally, I was asked about protection zones and payment for watershed services, to which I replied that in Uganda it is still very early stages; there needs to be a strong link between cause and effect, but if a water user is paying upstream communities to not pollute, there needs to be a clear monitoring and regulation process to prevent payments being made but achieving no benefit to the downstream water user.
In the last session, another speaker from WSP talked about the important role of rural banks – this linked to earlier discussions about the difficulty for CBOs to get access to commercial credit. WSP is actively involved in trying to tackle this problem from both ends – improving the financial skills and capacity of CBOs, and strengthening the financial institutions in this market.  However, she concluded that there are other constraints – not least limited water resources in many parts of Indonesia, but also the high cost of energy for pumping.
John Moyer, from the US NGO, Water.org, then talked about their Watercredit mechanism that attempts to get new sources of funding (notably Corporate Social Responsibility, CSR) into WASH and dispersed through microcredit at household level, but as a new player in Indonesia, they are focusing on using a similar mechanism for CBOs. Capacity development of CBOs in the classroom and on the job support to improve their skills and bankability. They are currently piloting the approach in 4 areas of central Java.
So today has been really interesting and I have learned a huge amount about this fascinating and hospitable country. I think there is a lot that can be shared with other regions of the world and I thank the organisers for giving me the opportunity to introduce RWSN to a new audience. Hopefully the practitioners here can use the network to reach out to fellow travellers elsewhere.
-6.217930 106.809535
Central Jakarta, Central Jakarta City, Special Capital Region of Jakarta, Republic of Indonesia

An explorer View all posts by SGF